Adult-beveraging around the pool at ‘Tween Waters

Sunshine. Swimming pool. Vacation. If there were ever three reasons for day-drinking, these make the best case. Add a menu of fun, icy, sweet, tropical, and boozy libations, and there’s really no excuse NOT to have one. Or two.

The menu at the Oasis Pool Bar & Grille at ‘Tween Waters Island Resort & Spa lists seven frozen drinks and nine on the rocks, each one more tempting than the previous. So instead of limiting ourselves to just one, my husband and I indulged in a mission to taste as many as we could.

We grabbed a table under massive yellow market umbrellas that allowed wedges of cloudless, crisp blue sky to peek through. With our first round and an order of Chili & Cheese Nachos before us, we dreamily watched the happy splashing of pool-goers as we let our cocktails wash away any trace of work-world woes.

We shared sips of a frozen blender concoction called Lava Flow, which tasted something like strawberry ice cream. But with a substantial kick, topped with a floater of 151-proof rum. That was the first thing we learned about the Oasis mixologists: They are not stingy with the pour. Unlike many resort bars we’ve occasioned, pool drinks at Oasis do not mean expensive cocktails with umbrellas, lots of garnish and little liquor.

We have tried Pain Killers at the Soggy Dollar Bar on Jost Van Dyke in the British Virgin Islands, which claims to have invented them and to make the world’s best. Oasis is a strong contender in the “best” department. It transported us nonstop to the Caribbean with its fruit juices, accent of coconut liqueur, and liberal dusting of nutmeg.

So tasty, they both slipped down quickly, and pretty soon we had a Pirate’s Punch and Raspberry Lemonade Twist in front of us. Raspberry vodka gave the latter its name, its rosy hue, and its wallop. Also fruity and coconut-tinged, the Pirate’s Punch did what its name promised. We sipped these more slowly, putting our feet up and savoring the freedom to wallow in warmth and utter relaxation.

We had plans to try a few more from the menu’s list of classics such as Bloody Mary, mojito, margarita, and daiquiris, but all that tropicality made us long for the beach (and all that liquor was warning us to pace ourselves). And if there’s any good reasons for cutting oneself off from day-drinking, it’s a walk on the Captiva beach and the promise of dinner at the Old Captiva House ahead. 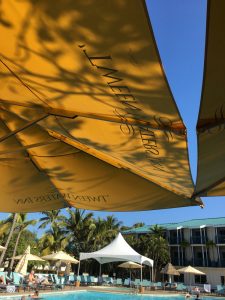 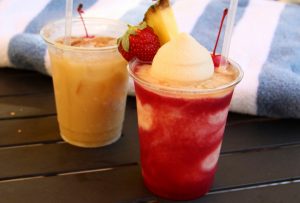 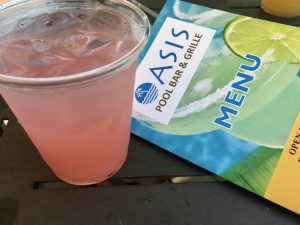