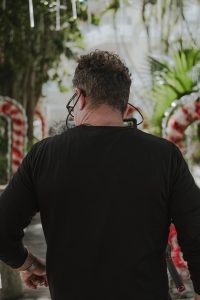 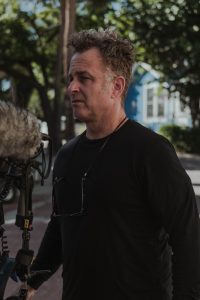 Erik Levine is an internationally renowned video artist and filmmaker whose amazing work has appeared in solo and select group exhibitions in major art galleries and museums across the United States and literally the world — United Kingdom, Germany, France, Switzerland, Denmark, Greece, Austria, India, Taiwan and more. Working within the medium of video, Levine is recognized for his sometimes dark, and always thought provoking, studies of the human condition — often the darker side of our existence, with subjects including a slaughterhouse, jail, geriatric facilities and tactical forces.

This past year, Levine was one of a select group who throughout the year receive a 5-week fellowship from the Robert Rauschenberg Foundation on Captiva Island, where artists are housed, fed and encouraged to do whatever they desire — be it work or relaxation. He chose work, but in this instance, he was inspired to turn his attention and his cameras to the lighter or brighter side of life that Captiva promises.

“My initial thought was to focus on the human experiences of leisure, downtime, the associations of pleasure,” he notes. “Ultimately, I think it became more about the juxtapositions and contrasts you find here, service providers and guests, work and pure beauty.” 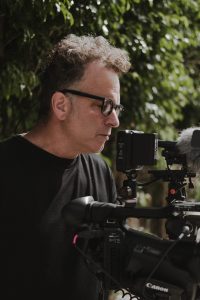 much more accommodating and interesting. The different buildings, the architecture and of course, the setting between the Gulf of Mexico and Pine Island Sound. Plus the people couldn’t have been nicer and more welcoming.”

As a Professor of Art at the University of Massachusetts (Boston) and a New York City resident, this was Levine’s first trip to Captiva — and he was equally smitten by the November weather. “It was spectacular,” he says. “Having weather like we had consistently, it might sound trite or banal, as a human organism living in this environment, it has an enormous effect on your outlook, well being and emotions — what a deep and profound pleasure the weather is. It’s almost like sex, it has that kind of rawness and connection with your body, at least for me. It puts you much more in touch with the world.”

Fans looking for Erik Levine’s take on ‘Tween Waters and Captiva Island will have to be patient. This artist has two video works to complete before turning his attention to the island lifestyle, which could take up to two years. From all of us at Sanibel Captiva Beach Resorts, thank you Erik Levine for your work — and we look forward to praising your final cut with standing ovations.

The Benefits of Booking Direct

This website uses cookies to improve your experience while you navigate through the website. Out of these cookies, the cookies that are categorized as necessary are stored on your browser as they are essential for the working of basic functionalities of the website. We also use third-party cookies that help us analyze and understand how you use this website. These cookies will be stored in your browser only with your consent. You also have the option to opt-out of these cookies. But opting out of some of these cookies may have an effect on your browsing experience.
Necessary Always Enabled
Necessary cookies are absolutely essential for the website to function properly. This category only includes cookies that ensures basic functionalities and security features of the website. These cookies do not store any personal information.
Non-necessary
Any cookies that may not be particularly necessary for the website to function and is used specifically to collect user personal data via analytics, ads, other embedded contents are termed as non-necessary cookies. It is mandatory to procure user consent prior to running these cookies on your website.
SAVE & ACCEPT